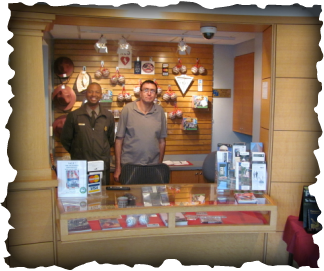 Tripp has an uncanny memory. When he was 5 or 6 years old, his parents hired someone to fix their hardwood floors. A year later they wanted to get some additional work done and were not able to remember the repairman’s name. Tripp overheard the conversation and commented, “That is Mr. Quizenberry, the wood guy.”

Tripp moved to Cincinnati from Blacksburg, West Virginia, with his mother so that they could be closer to his sister and her family. He didn’t know anyone but his sister and was looking for a way to get more involved, make some friends and help others, so he started attending a sandwich making ministry several blocks up the street at Guardian Angels Church. There a group of 12 – 15 neighbors meet each Tuesday and make 200 peanut butter and jelly and 200 bologna sandwiches. He enjoys how friendly everyone is and making the food. During the course of the morning the group will say prayers with each member making a devotion.

Tripp always prays that everyone has friends like he has.

Another of Tripp’s gifts is his interest in history, especially American
history. He also loves to keep up with and discuss current events. Recently, he closely followed the royal wedding, events in Libya, and the possible shut down of government offices. He went on a tour of the Taft Historic Site in Mt. Auburn and was surprised to learn that there is a US National Park right here in Cincinnati! Tripp knew before visiting that William Howard Taft was the 27th President and that he also had served as Chief Justice. He met Ranger Reggie Murray who invited him to volunteer. Now on Thursdays, Tripp works at the welcome desk, greeting visitors and escorting them to their tour. Tripp says he feels like “a VIP” at the Taft Historic site.

Tripp also loves to read, so Ranger Murray gave Tripp the diaries of the Taft family to examine and see how they can be incorporated into the tours. He loves reading the diaries but says the best part of being at the park is meeting people from all over the world. He said last week he met a couple from the Philippines and found that interesting since Taft was once the Governor General of the Philippines. Tripp has become well known at the Park and likes that he is a making a contribution to his country.